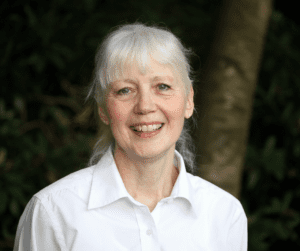 I was referred for implant treatment by my own dentist after an infection in the root of my front tooth a few years ago which had caused the crown to fail. I’d had the crown on my front tooth since the age of 18, so it had been there for many years. But I didn’t want to replace it with a false tooth, I was keen to have an implant.

I was referred initially to a place in Warrington who were taking ages to get back to me, but then I realised that Dr Young was around the corner from where I lived so I booked in there for an implant consultation instead.

I have been terrified of dentists all my life- when I lived in the West Midlands I always went along to the dentists with my mother-  so it took a lot of courage to walk through the door. I am so glad I did.

Dr Young explained the procedure in great detail – from the operation to remove the infected tooth right through to the implant itself. He also explained how long each stage would take. So whilst I was still apprehensive, I felt more in control of what was happening.

The procedure itself was straightforward and pain free- there was a little bit of pain once the anaesthetic wore off at home which I simply controlled with paracetamol.  What impressed me was that his team phoned me twice – once the evening after surgery, then again the next day to check that I was OK. The nurses at the clinic are always so accommodating  and helpful,  and Dr Young is a lovely man , very polite and respectful. My implant now looks and feels completely natural and it’s hard to tell which of my front teeth is an implant and which is the normal tooth- I can also eat whatever I want without a second thought.

So if you are nervous about the dentist but need an implant, don’t hesitate to go and see Dr Young. If I can, anyone can!